APHA is looking to the future, by encouraging new members to 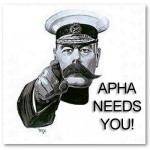 Nominations from field staff are invited to join the new ‘Operational Board’. Details of this can be found in the members area of the site. There will be many opportunities during 2015 for ‘young and old’ to get involved further within APHA to make the Association a better organisation for you, the membership.

Please remember, APHA exists for you, if we can help make your profession work better for you, then tell us, and together we can make it happen in 2015

You will be aware that the creation of an Operational Board was discussed and agreed at the AGM in September, 2014. The Executive Board, in October, agreed the terms of reference attached to this email.

Nominations are invited from any operation port health official who would like to be considered for appointment to the Operational Board. Should there be a greater number of nominees than required then an election will take place within the Technical committees.

Nominations are invited by 31st January 2015 and should be forwarded by email to the APHA administration address.